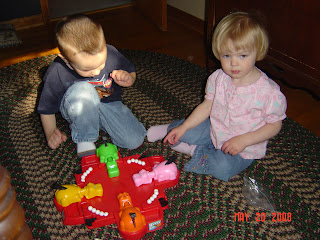 I’ve been amazed lately at the appetite that the kids have had and after weighing and measuring them both recently it’s easy to see why they are eating so much. Toby has grown an unbelievable 1 1/2 inches since March and gained almost 3 pounds since then as well. That’s a lot when you’re a little guy! Lilly has also gained 2 pounds and grown over an inch! This has been obvious in their clothes as well so thankfully the seasons have changed and the clothes I had put away for spring/summer are right on the money. Lilly is in 24 months-2T and Toby is mostly into 5T’s now.

I also chose this picture because it shows another milestone for them. It seems that lately they have crossed into really playing TOGETHER more. Toby takes great pride in teaching Lilly how to do “big kid” things instead of telling her she’s too little to do them. Yesterday they had the best time after he taught her how to play Hungry Hippos and she actually played with him. Of course that lasted all of 3 minutes, but that’s a long time when you’re not quite 2 and 4 yet. These are the best of times….