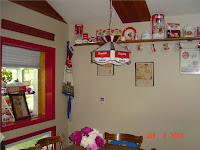 So since I am on hiatus from scrapbooking, I have to get this memory down because it has to be remembered:

For some unknown reason lately, Lilly seems to have developed an odd fear of cows. She hasn’t had a close encounter or anything, sure we’ve talked about them, driven by them, seen them on tv and in books, etc. but nothing out of the ordinary. So, I post this picture of our kitchen eating area because she keeps pointing toward the ceiling when she is sitting in her booster seat eating and repeating “Cow,” with fear in her voice. We’ve been through the options, could it be cloud, clown, etc. but those are all answered with very sure no’s and when asked if she’s saying cow she gives a very sure yes answer. I took the picture I guess just to make sure that no weird images were going to show up in it. ;o)

So this has been going on for a couple of weeks now. Yesterday was a little creepy. She hasn’t been feeling well and has come down with hand, foot and mouth so has been very clingy and irritable anyway. She was sitting in her seat coloring actually and sharing some of my cereal. The cow subject came up yet again and we started talking about it and making cow noises. Apparently I must have made a noise that was a little too realistic because she became hysterical like I have never seen before. She screamed, hands over face, tried to get out of her seat, etc. I knelt beside her and held her since she was still strapped into her seat and I could feel her poor little heart racing! She was terrified and kept repeating, “Cow!” and looking up toward the ceiling and then burying her face into my chest. What the heck!?!?!?

I finally was able to get her out of her seat with her still attached to me, arms wrapped around my neck and legs around my waist. We sat on a chair and she stayed that way for almost 20 minutes! I am at a loss. I cannot for the life of me figure out what in the world is going on here. Are we being haunted by a cow hanging from our kitchen ceiling?

Later in the morning after I had calmed and distracted her for a while I found a counting book of ours that has a picture of a cow in it. I tried to be happy and calm and show her the pictures and ask her about them and when we got to the cow her demeanor changed immediately. She shut down, put her head down, and hid her face. Weird.