I have officially broken in our recently repaired oven. I was very anxious and quite frankly, scared to death when I turned it on, but I started slowly. My first experiment was with these color-cookies and they only required preheating. You actually turn the oven off before you put them in to melt. Very fun way to use up your old broken Crayolas and the kids can help take off paper and break them up for the mini muffin tin. 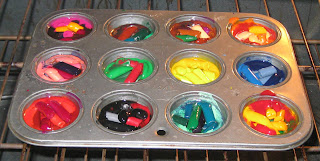 My only mistake was that I got so comfortable with the fact that the oven was off that I forgot to get them out right after they melted so the colors blended more than I had hoped. 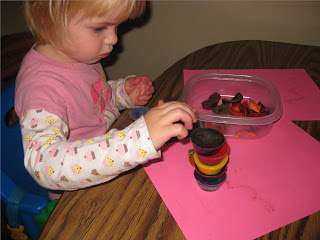 As you can see in the broken ones below(a little fuzzy, sorry) the colors are mixed, but had I gotten them out to cool sooner they would have been better swirled on the outside too. Still fun to color with something other than the usual stick crayons and we used up most of our broken ones and several of our excess colors that aren’t used often. 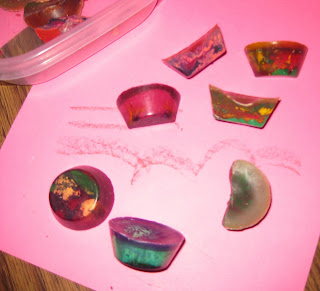 We still have not made it to the pumpkin patch and our one lonely, homegrown pumpkin is patiently waiting for friends, but we did make these paperbag pumpkins. Of course it involved painting and cutting so that had everyone excited for them! 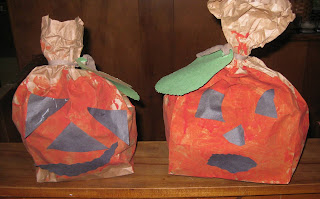 This being Saturday, the week caught up with us this morning around 10:00 as it did last week. The kids were asking for lunch then, which usually means they are ready for lunch/nap since that is our routine. They are very comfortable in knowing that after lunch—ahhhh sleep. We made it through another hour and served up a carpet picnic lunch on the living room floor. By 11:15 Toby was laying down munching on his sandwich and Lilly was yawning while saying, “I’m not tired, Mommy.” 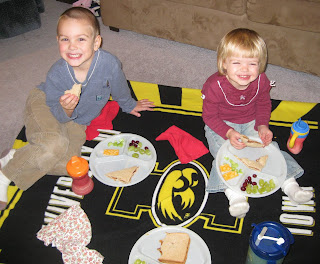 I also have to laugh at something that has happened more than a few times lately. Some of those “mommy moments.” I know most moms reading this can relate. Toby has been so amazed lately when he gets “caught” doing or saying something that he shouldn’t be when I am not even in the same room. For example, the other day they were both playing in one of their bedrooms and I was in the kitchen and I heard him doing something in there that he knew he shouldn’t be doing. I honestly can’t even remember what it was now. I called him into the kitchen and talked to him about it and he looked at me with this look of total shock and innocence at the same time and said, “But Mom, how did you even know I was doing that? You were not in there!” So, I asked him if he did it and he said he did, which I knew he had, I heard it with my super-sonic mom ears. And that’s just what I told him, mom’s have magic eyes and magic ears that let them hear and see what their kids are doing even if they are not in the same room, so kids need to think about doing what they know is right, because not only does God always know what you’re doing, but most of the time, so does Mommy.
Previous Post: Homemade Books
Next Post: This is what I get…..