We started this messy project yesterday and I considered doing it inside for about 30 seconds because it was pretty windy out. Thankfully we did it outside, what a messy but really fun project! We started inside with cutting out the leaves from construction paper. 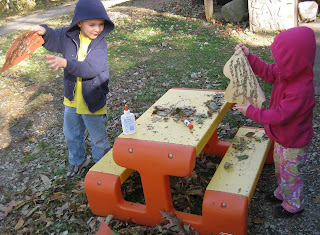 Then went outside to glue and crush leaves for the mosaics. I had plans to make mobiles at another time from fall scavenger hunt finds like Toby’s pine cones but then we ended up having so much fun crushing leaves that we covered both sides of our paper leaves, grabbed some sticks, and made these into mobiles instead. 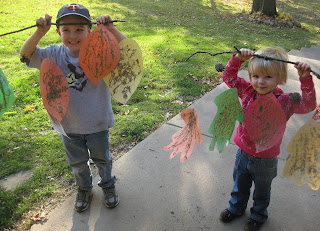 Now that Halloween is over, I have already turned my jack-o-lanterns around and I think they will help us hold onto fall for as long as possible. I love how they look in our big picture window! 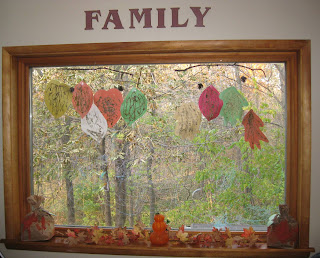 I am also thrilled that this is happening as I had hoped it would! Toby is teaching Lilly her numbers. I just finished our number charts, special thanks to my sister-in-law for passing down the digits from her old homeschooling supplies. I had planned to have Toby help me with the chart but decided to do it myself because I wanted to make sure everything was secured on really well, and I also wanted things placed to show the increasing numbers, etc. This is actually not one of the best pictures I have of them doing this, but the other learning center we have up near here has our last name, address and phone number for Toby to practice and I am not good enough with fixing pictures to take all of that out to secure it from the www in the other pictures. 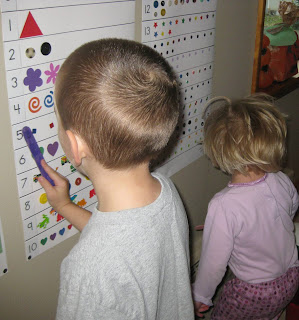 When I taught Toby his numbers we made a simple chart by writing the numbers ourselves and he just picked them up without much trouble at all. I had a feeling my hands-on little Miss Lilly was going to prefer touching them and counting buttons and stickers. She does. Toby is having just as much fun teaching her and he is using the charts in his own way too. They are also using our colored popsicle sticks that have come in handy to use as pointers too. Sometimes I think she learns things quicker and easier from him than from me and actually that’s pretty cool. He’s a really awesome teacher. 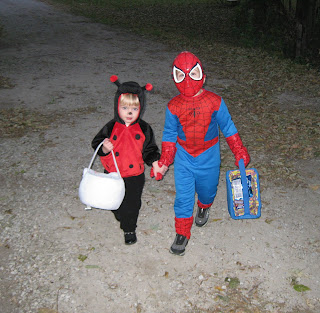 This is the first time the kids really took an interest in trick-or-treating and we just don’t make it a big deal. I’ve never been a big fan of it but they actually made it fun this year. The weather couldn’t have been more perfect and we made the rounds to see grandparents and some extended family. Just enough for a few treats and back home to bed before all the other ghosts and goblins were even done!
Previous Post: Imagination
Next Post: Weekend update