First things first: Mark, I’m sorry but it’s just too good not to share and I know you can laugh at yourself and see the humor in it too. So, please accept my apology in advance for sharing this story with the entire world, or at least the 20 or so people who may actually read it!
~~~~~~~
For the rest of you, grab some popcorn and a cold drink and read on!
~~~~~~~~~
It was a pretty ordinary Sunday afternoon and the kids were napping. Mark and I were standing in the kitchen chatting about the afternoon/evening plans when something caught my attention out the window over Mark’s shoulder. I quickly realized what it was and had about a 3 second debate in my head as to if I should even say anything to him. Some of you who know us may remember that last summer and fall Mark spent a great deal of time trying to trap groundhogs that were digging holes around the house and property and had been making big stinky messes in the process. If I remember correctly he trapped 4 or 5 of them and hauled them out several miles away, across the river and let them loose, giving them a stern talking to so they would not return or send their friends for revenge. Anyway, for some unknown reason, I nodded my head out toward the little critter waddling under the spruce tree. 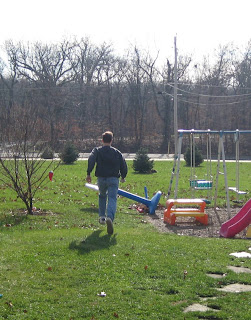 Mumbling something that I am not sure I want to know, he sprinted to the front door, stopping only to grab Toby’s kid-sized metal baseball bat, and out he ran full-speed toward the unsuspecting groundhog. I never doubted for a second that he would never actually hurt the thing but I had to ask anyway, so I said, “What are you going to do beat it with the bat?” Mr. Macho replied, “If I have to!” Yeah right! Knowing better, I grabbed the camera! 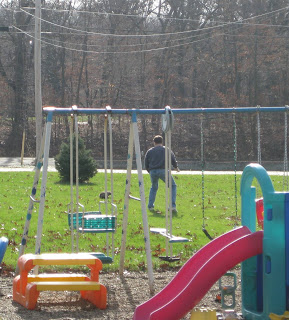 Instead they started with a stare down. The darn thing froze in it’s tracks and just looked at him like, “What do you want?” So Mark waved the bat around and yelled a few things at it and it just kind of looked at him like he was speaking a foreign language. 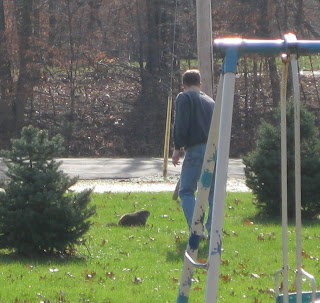 This is the part I think where Mark asked him if he needed to sit in the naughty corner or if he was going to leave our yard! Again, the groundhog hunched his shoulders forward and slouched down. If groundhogs could laugh I’m pretty sure he was cracking up right about now. As for me, I am really not sure at this point how I am even holding the camera still and not wetting my pants. Tears are streaming down my face I am laughing so hard and Mark had not even started his “crazy-man-chasing-groundhog-out-of-the-front-yard dance” yet! 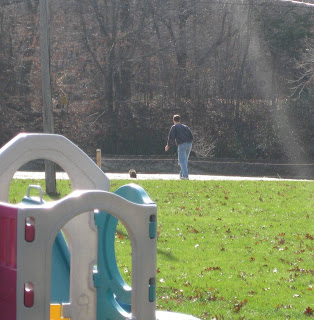 Then he danced….and ran…..and jumped! That seemed to finally scare the poor little critter….. into the ditch anyway. I can only imagine what people were thinking as they drove by. 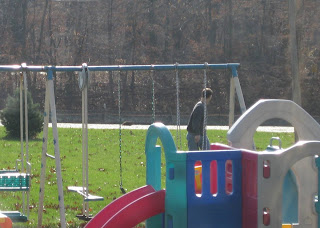 Finally, after one last stare down, they both sulked to their own sides. And this my friends, is why I love this man so dearly, because he’s a lover, not a fighter!
Previous Post: All in a day
Next Post: It’s the little things…