My friend Lynn came over last week and witnessed the crafting that goes on here. I’m not sure if she wanted to run or join in! We finally finished our melted crayon shavings letters and hearts and were able to add a couple of heart chains to decorate the window for February. I don’t have a lot of seasonal decorations and prefer not to at this stage in our lives. Less clutter and it’s more fun to make things like this instead. The dark backdrop just doesn’t cooperate for a nice picture but they are really cool when the sun shines through them like stained glass.

Today we stayed in since it was blustery cold and snowed in the night…again. Even so, it felt like we did a week’s worth of fun all in a day. 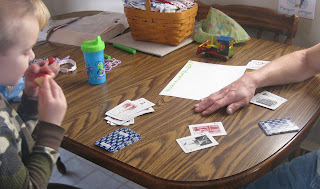 Last night after mass and dinner my parents came over for dessert and card-playing. T got to stay up a little late to join in that fun so today he was interested enough that he wanted to learn a new card game. M taught him War and he caught on pretty quickly. 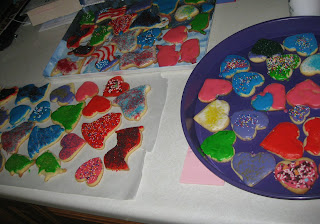 M says if I blog about baking cookies again that people will think that’s all we ever do and that we are always eating cookies. Well, honey, truth be told, there is a certain someone in this house who always needs to have a sweet treat around to snack on, so yes, we do bake a lot of cookies….and that someone is NOT ME, remember my weekness is cheese(and salty foods). Since we were down to a few last banana muffins it was time to move onto cookies. Of course we used the opportunity as a teachable moment to talk about the upcoming holidays, notice the flags, United States and bells, aside from the hearts! So, we had a slide show presentation of former Presidents on the laptop, talked about the 2 with birthdays coming up, and checked them out on their coins…..then overloaded on cookies and frosting! 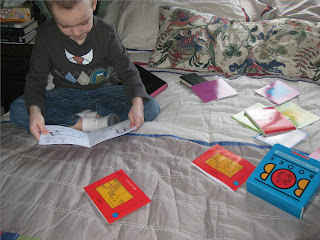 Anyway, T also spent some time practicing his reading. I have found that he is able to read all of the 12 books in the first BOB set already phonetically but he is gaining confidence by practicing so he can do them with less sounding out. Today he was so excited after fluidly reading a middle of the series book that he said, “I’m a reader, Mom! I really am!” I only pray I can preserve that excitement for reading and learning! 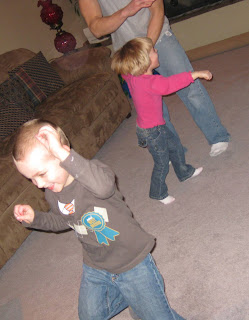 No day would be complete without a little “Dance Party!” Tonight we rocked to Bob and Larry Sing the 70’s which is awesome! I love 70’s music!
I didn’t want to overload with pictures of L’s fashion show so I’ll have to update the slideshow with some new pics. After a day like this it’s no wonder the kids were both crashed out by 8:00 tonight without so much as a peep!
My favorite moment of the day was at bedtime when I thought I would start teaching T to actually say the Our Father. He hears it in mass, we say it here but he just never joins in. I always assumed it was just too long still. So I asked him if he wanted to learn it and if he could just repeat after me. I said the first line….he said the next 2! I said a line, he’d say the next, all the way to the end. The little stinker already knows it! He just never said it out loud. I was surprised but I guess I shouldn’t be, they both have really great memories and have picked up the guardian angel bedtime prayer and the dinner blessing and even L says those with us. It just goes to show that if kids hear things enough times, they certainly will repeat them!
Previous Post: It’s All That….
Next Post: Keeping it real