Into the storm:
When we left home around 4:00 on Saturday afternoon, a few flakes were flying, as they had been all day. We checked the radar but figured we could safely arrive in Davenport before the worst of it. We were very wrong. It was hit or miss all the way over and took a lot longer than it should have, but thankfully we were not among the 20-some vehicles in the ditch along the way. When I called the hotel to confirm our reservation as we were leaving town, the lady assured me that it only raining there…I’m not sure she was being truthful….or maybe things changed that quickly. 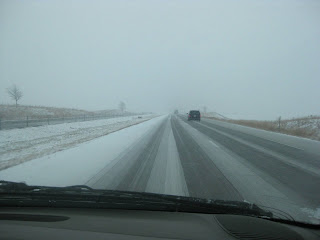 Either way, we arrived safely in time for baths and bed….only to lay awake for HOURS listening to the elephant aerobics going on in the room above us. I am not a fan of sleeping in hotels anyway, but what it really amounts to is that I am really not a fan of other travelers who have complete disregard for other people who may actually want to SLEEP before midnight! Listening to people stomp around, kids jumping on beds, running up and down the hall, and slamming doors is not my idea of a peaceful night of sleep.
~~~~~~~~~~~
Putnam Museum~~Davenport, Iowa
Sunday afternoon we headed down to check out the Putnam Museum which was more of a living history museum than I realized it was going to be. There was a more hands on section that the kids enjoyed playing and interacting in. This old-style homestead scene reminded me of a part in Little House on the Prairie with the water ladle! 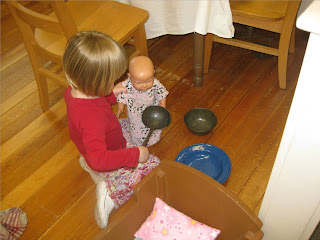 M met up with an old friend of his in a really nice animal section of the museum. And we all thought this guy was pretty amazing! 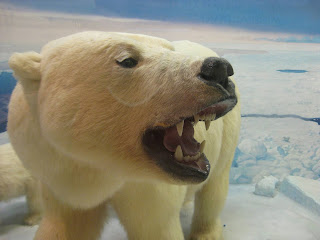 All in all, M and I could have spent a lot more time here but given the kids ages we passed through it pretty quickly. Downstairs there was a fascinating Egyptian exhibit complete with extremely old mummies and artifacts which the kids had absolutely no interest in at all. The Great River display did seem to hold their attention a little longer as we took an indoor nature walk through the Mississippi River bed and identified the wildlife along the way, that was right up our alley! Great museum with a ton of things to see and learn, but we’ll be waiting until the kids are a little older and able to appreciate it more before we return.

Next stop, Family Museum of Arts and Science, Bettendorf, IA

Monday morning we checked out of our hotel, much to the disappointment of T & L. The fun-factor of the entire trip weighed heavily on the fact that we stayed in a hotel with a POOL and BREAKFAST! But, off we went to see and do and they were not dissappointed!

The Family Museum is a very hands on and FUN place. It was clean and well-kept and just an overall great atmosphere. There were so many things to touch, manipulate and climb on there. 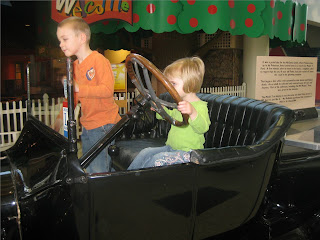 There was a completely interactive spanish home in one corner in which these two mixed in a little Italian by doing some cooking in Strega Nona’s magic pasta pot from one of our favorite books! 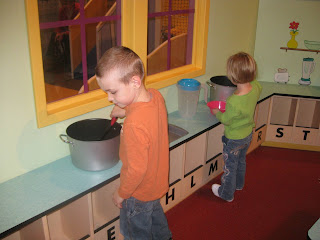 A couple of things we didn’t spend time in were the general store–probably because we do a lot of that type of play at home, and the really great looking outdoor playground–because it was cold and windy outside. I’m not sure it was even open yet but we checked it out through the windows and it looked really large and very fun! 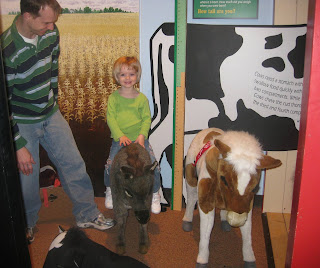 L tried out her riding skills and T plowed a field or two in the agriculture area which was awesome, complete with the cab of a combine where the kids could sit and pretend to drive it while they watched a video of the field in front of them as they plowed it. 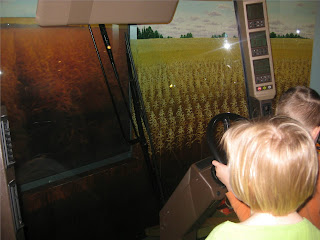 The music section included this huge xylophone made of different materials to show the different sounds each of them make. 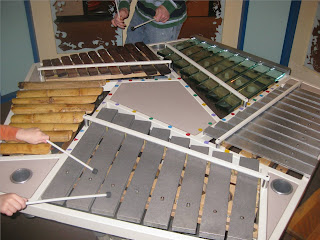 Numerous other musical instuments and displays made this area so exciting that I feel like I am not doing it justice in my description at all. Who knew PVC pipe and an old broken flip-flop could be so musical? 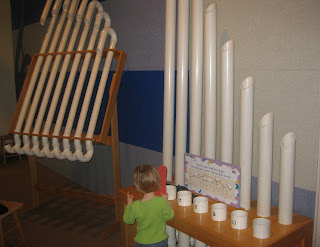 Fun house mirrors are taken to a whole new level with the wonders of technology in two different areas, here is one of them: 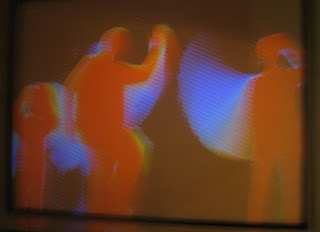 We explored the human heart in full scale and learned about other body systems as well as healthy eating and lifestyle choices. 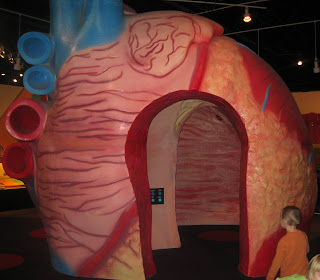 The traveling exhibit currently is Bob the Builder so one main area was dedicated to Bob and his team, all interactive, hand-on, lots of fun. 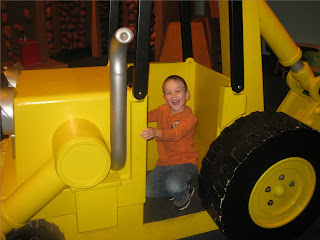 ~~~~~~~~~~~~~~~~~~~
One last stop, John Deere Pavilion, Moline, IL
We didn’t really think we would make it to this last stop on this trip, but the Family Museum was small enough that we made it through there with time to spare before lunch. So, we headed south to Moline, missed the exit, turned around and finally found the John Deere Pavilion. It’s a little ways off the beaten path but after you get the right exit it is marked pretty well. Plenty of parking right behind the building as well. 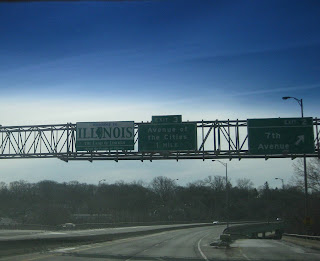 Aside from swimming and eating breakfast at the hotel(they’re easy to please!) this was probably the highlight of the trip. Free admission to wander around and sit in….. 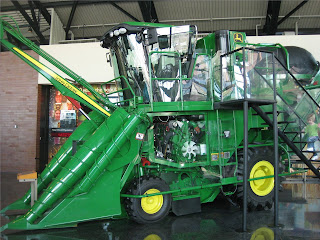 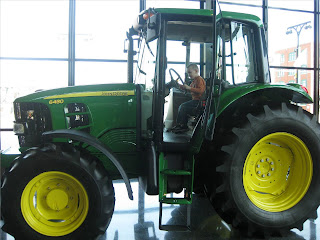 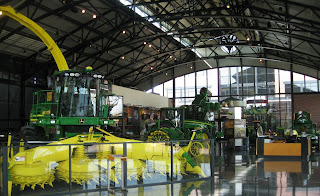 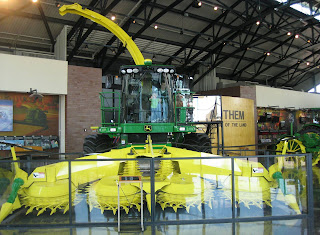 VERY LARGE TRACTORS! What more can a boy, girl, or grown man want? OK, I admit, I really liked it too! 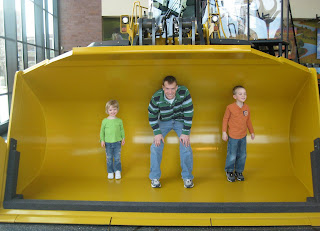 After a picnic lunch in the van, in the parking lot behind the pavilion(there is a train track just feet behind there and we actually watched a train while we were inside-another highlight!) we hit the road toward home! Although windy, it was a sunny mid-50 degree day for the drive home. Quite a change from our drive there just 2 days before! 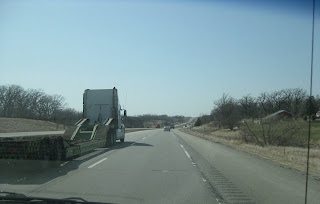 Although it was a quick trip, it was a wonderful time to be together, just what we love most. It was also a fairly inexpensive little get-away since we have a local membership to the zoo/science center(thanks Dave & Anita!) that got us into the 2 museums for FREE! We also always bring as many meals as we can with us so we eat out very little. We usually try to stay in a hotel that offers a deluxe continental breakfast and bring fresh fruit and healthier choices with us as well. Lunches are always picnic style on the go or in the hotel, brought from home, same with snacks. We bring reusable water bottles and refill them with ice from the hotel, less waste and healthier. So basically we paid for the hotel, 1 fill up of gas, and 2 simple dinners out!
Previous Post: Resurrection rolls & spring crafts
Next Post: Some things to think about…