T has been asking to read about “when Jesus died and rose again” a lot lately, obviously that is what we are talking a lot about these days in preparation for the coming holiday. As luck would have it, this week, one of our Lenten activities was to make Resurrection Rolls too! There are a lot of different ways to do this and I found so many recipes(there are also Resurrection cookies) but I chose this one because it was the easiest and they could actually do most of it themselves. 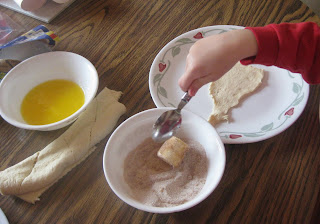 Ingredients:
1 package of refrigerated crescent rolls
8 large marshmallows
bowl of cinnamon/sugar mix
small amount of melted butter(I used a couple of T.)
Directions:
Each dough triangle represents the tomb. Lay them out flat.
Each marshmallow represents Jesus. Roll each one in butter, then coat it in the sugar mixture(when we did this, T said, “Just like when they put oil and spices on Jesus’ body!” He made the connection before I even started to explain!!)
Lay the marshmallow in the dough and wrap it up, carefully pinching the seams together well.
Bake according to the crescent roll package directions.
When cool, break open(or as my kids did, poke your finger in) to see that the body of Christ is no longer in there! 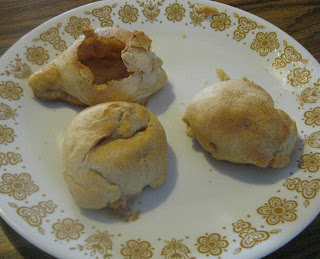 They don’t look especially exciting but they are very special because of what they respresent and because the kids made them and they understand what they mean. AND, they taste REALLY, REALLY great, just like a cinnamon roll! 🙂 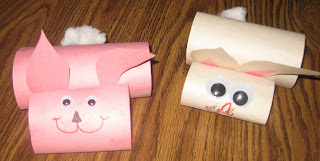 The kids have been in such a crafty mood this week and my notebook is full of so many ideas that we have done WAY MORE than we usually do in one week! Above are the “bunny foo-foos” that I think looked a lot better in the book but the kids like them a lot!
Basically they are just 5″ and 3″ strips of construction paper cut and rolled, then stapled together.
Before constructing, toward the middle of the smaller strip, draw the nose and mouth and glue on googly eyes.
Cut out the ears, we stapled those in too. Glue on a cotton ball tail…and done! 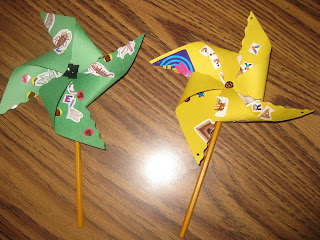 These pinwheels actually do spin, although next time we will use cardstock or posterboard because construction paper is a little weak. They wanted to use stickers to decorate for some reason so this is what we ended up with. 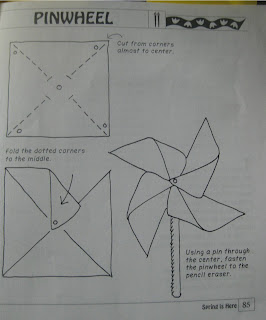 Above is the page from the book we used showing how to cut the paper, which needs to be a perfect square to begin with. I believe we did a 5″ x 5″ square for ours. You stick a straight pin through the paper and then through the pencil eraser to make it spin and that made me very uneasy…..so I left “spinning room” and then bent the pin down the other side of the pencil and taped it with electrical tape to make it safe for little hands…..not that they will be allowed to play with it unsupervised anyway but at least they won’t get poked this way. 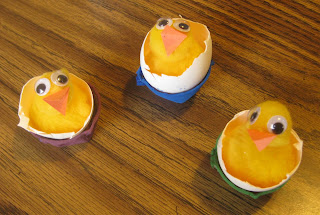 This last one is my personal favorite! These little chicks were requested by T and although no one wanted to paint their nests brown, they came out SO CUTE!
I cut individual sections from an egg carton and we each painted our nest(yes, I even made one too!). We saved some cracked eggs from the other day and cleaned them and let them dry well.
You just put the egg down into the “nest” and glue a large pom-pom in for the body with elmer’s glue. With a smaller pom-pom, glue on googly eyes and a beak(cut from construction paper), then glue the head onto the body. That’s it!!
~~~~~~~~
Whew, no wonder I’m so exhausted, it’s been a long week! We are taking a little break this weekend though and going a away for a couple of days. I’m pretty sure I’ll have something to blog about that next week! 🙂 Maybe we can RUN from this SNOW we are getting here today!
Previous Post: "It’s like a bird party around here!"
Next Post: Quad Cities Weekend