Here’s a look at how we celebrated Earth Day yesterday: 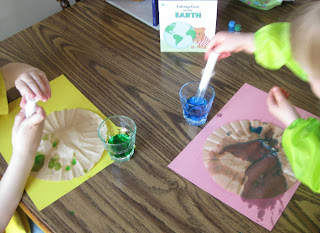 First, we read a few books about taking care of the earth and talked about the day which T had been anxiously waiting for since it was marked on our big calendar. Then we attempted to do water colorings of the earth with coffee filters and colored water. We didn’t have eye droppers but made it work with the overabundance of medicine syringes that we do have. 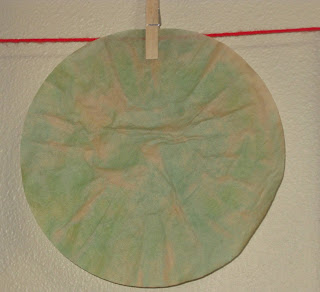 I really didn’t think the water was dark enough or something because when they were wet you really could not tell the difference in the colors, plus we used tan filters so I figured this was a flop. But, after sitting in the sun in the garden window for a while to dry I think they turned out pretty nice after all. 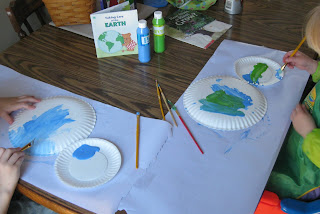 Since I didn’t think the filter project turned out and it took all of 5 minutes to do, we moved onto painting the earth on paper plates. Painting is always a favorite around here. 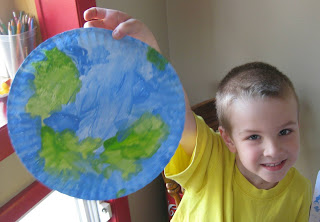 Very impressive! We did start another project that involved grass seed but soon realized when we got to the point where we actually needed to add the seed…we didn’t have any. I really thought the big bag in the garage was grass seed, turns out it’s fertilizer. Doh! So, that project will be completed another day! Instead we headed outside to work in the garden. I did some weeding and my little helpers were very helpful until a beautiful white butterfly came along and just BEGGED them to chase her…of course they didn’t want her to play all by herself….so they chased her for the longest time. It was pricelss really, the two of them running after the same butterfly around the entire yard for at least a good 10 minutes. Just when I would get nervous and think it was about to lead them too far away it would bring them back toward me. 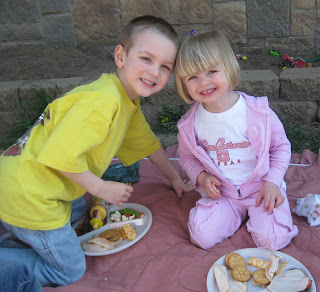 After all that activity we had a nice little picnic lunch in the shade since it was really starting to warm up by then. As we were sitting there I had to laugh a little because again I was struck by how in tune the two of them are with the sounds of nature. When I often get distracted by the annoying sounds of the endless stream of trucks, cars and motorcyles rumbling up and down our road, the kids draw my attention back by asking if I heard the robin saying “cheer up!” M and I were just talking about how funny it is that in all the many years we have lived here, we have never taken notice or such pleasure in the birds and beauty that we have as of recently. Kids make you do the funniest things. 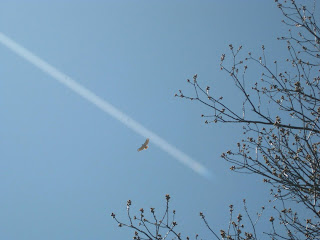 During our little picnic we were also visited by several hawks soaring high above us. What a thrill that was when they finally realized what was making that high pitched sound!
~~~~~~~~
We had hoped to go over to the park to clean up the trash there since we are all so annoyed at how much we see on our nature walks but M was not able to take off time to go with us and we all really wanted him to go too. But, we talked about how important it is to take care of the earth everyday, not just on Earth Day. So, we will go do that as soon as we have the time to do it together. Even though not everything went as planned, it was a beautiful day all around!
Previous Post: The Life For Me
Next Post: Next Post