I had really good intentions of splitting these posts up into smallers ones but suddenly it’s Saturday and I am in the midst of baking princess and castle birthday cakes for and almost 3 year old! So, I’ll try to keep the words to a minimum and attempt to pick a few of the best pictures. There is no way I can get through our entire trip here because there is just too much to tell! So here are a few more highlights. 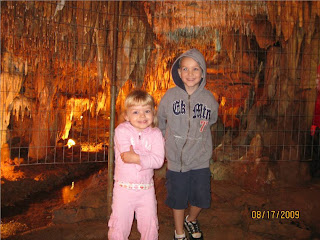 Jacob’s cave was the first cave that we went to and we happened to be the only people there that day. No surprise there given the state of that place. 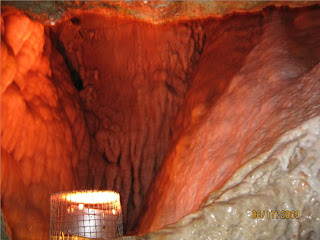 The cave was pretty cool but the guide left a lot to be desired. She was less than thrilled to be there too, didn’t really know any facts or information about the cave itself other than which formations looked like animals and things. Thrilling. Their website says they have the world’s largest geode, which was my reason for going there. She breezed by this(above) with barely a mention other than where they stuck the dynomite when they found it. When I asked if it is really the world’s largest geode I got a, “mm hum.” Great, thanks. 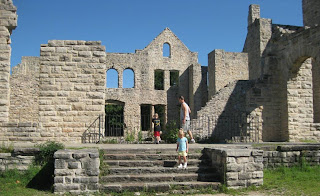 Ha Ha Tonka Park was one of the most beautiful places we visited on the trip. That place is just gorgeous. On a bluff in the middle of it all is this castle. It has quite a history that I won’t get into here but it was so interesting to learn about. 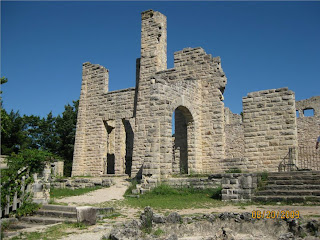 These are the remains after a fire gutted the castle in the 1940’s. It is still a sight to see, and the view…. 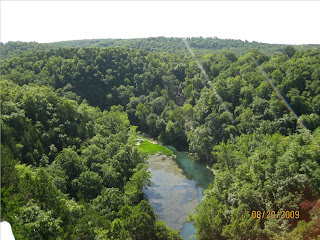 This is just a taste of the view from up there. This is looking down at the spring that feeds into the lake. When we were looking down there it looked like that water was really nasty and green but later we walked down and it was far from it. I’ll get to that picture in a bit. 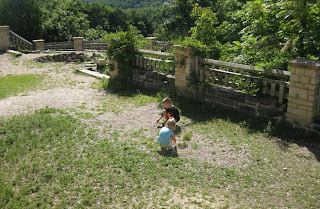 These two monkeys finally found DIRT to play in! I think I mentioned before how the lake is down sort of in a valley so the land slopes everywhere into it. Therefore, there are only 2-3 places on the entire lake where there are beach areas. There was only grass and rock where we stayed and I think by mid-week these guys were itching to get dirty! So after they checked out the “cool castle” they found sticks and dirt and got busy! 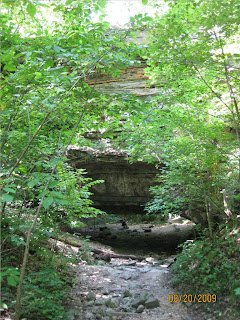 Another awesome sight in Ha Ha Tonka Park is the “natural bridge” that you can walk over and almost miss and walk under and see this. It was amazing. Truly a beautiful thing. 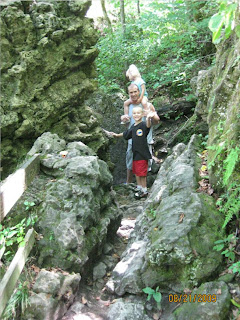 I cannot tell you how many miles we hiked that day. Many rugged miles and the kids were such troopers. Never a complaint or a fuss at all. We would have stopped at any point if they had wanted too but they kept asking to keep on. So we did. 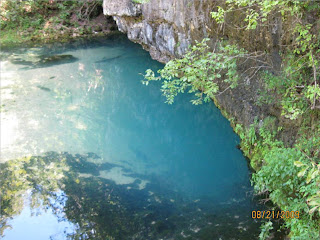 This is the spring we looked down at from the castle. The green color comes from the things that are growing in it and keep it so clean. The water is crystal clear, like you could pull out a cup of it and drink it. The most amazing part is that it just seems to flow right out from the bottom of the bluff with no starting point. 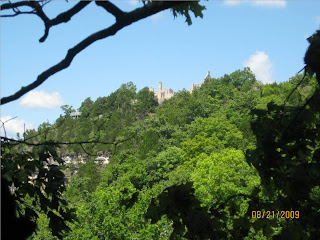 Looking back up as we are hiking up the other bluffs to a view of the castle, where we started. 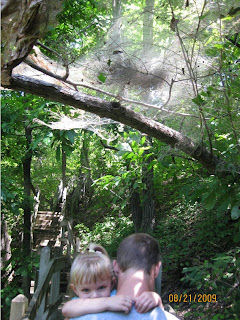 A few things about this picture: 1) notice the stairs ahead of us. The sign said we had approx. 318 steps ahead of us, it had to have been more! 2) the tent caterpillars above M and L were EVERYWHERE down there, I mean everywhere. There was a branch hanging over our cottage with 3 tents in it and we had those caterpillars on the deck all week. The deck had frass all over it! M even found some starting to make tents in our lawn chairs after he had the chairs folded up and put in the van for the night! 3) look at her face! I just love this picture! 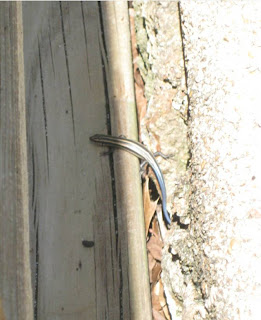 These little blue-tailed salamanders were all around the resort. This one was next to the deck. The kids were determined to catch one but this things are quick! 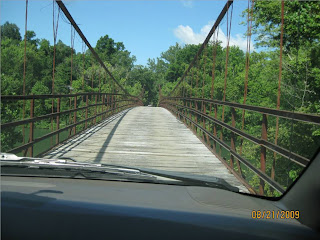 Just 2 words for you here: SWINGING BRIDGES!
We learned a couple of valuable lessons on this trip. 1) the GPS takes you on the route with the fewest amount of miles. That may mean several miles of gravel roads around the outter edge of a state park where you hear banjo music when the wind blows….sometimes you need to follow your gut and get back to the highway first, although M says, “Then we would have missed driving over the swinging bridges!” I say, “And your point is? There were ENTIRE boards MISSING!!” 2) commercialized tourist places are usually not the best places to see “natural wonders,” those things are often hidden in places like state parks and you may have to look a little harder but they are GEMS when you find them. 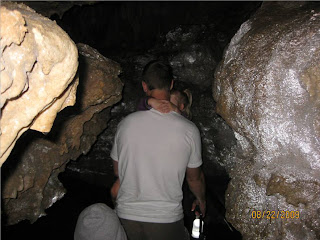 Take for instance the caverns in Ozarks State Park. This cave tour put Jacob’s Cave to shame. A naturalist gave the tour and he was very informative PLUS there is no electricity in the cave so we used lanterns-very cool! T was disappointed after we went through Jacob’s cave because we went into the cave through a building. He didn’t think it was a “real cave” after all. This one sealed the deal for him because we went into it through the natural opening(and a little brick wall with a gate) plus both of the kids were free. So we paid less, and got more, love it! 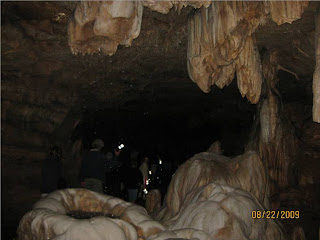 One of the highlights in the caverns is Angel Showers which is the flow of water you can hopefully see here down into the “bathtub” on the left. After all of the years they still have not found the source of this water. 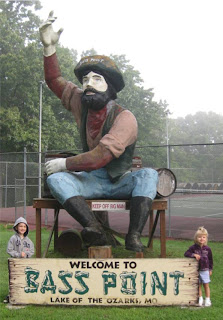 Overall this was another wonderful family vacation. We stayed in our budget, had a super time, had many new experiences and learned about another state. Next year we may be headed out west to the Rockies!
Previous Post: Ozarks-Part 1
Next Post: Who’s the teacher here?