Hard to believe it’s Friday again. For the most part it’s been a stick-to-the-basics type of week as I try to knock a few other projects off of my never ending to-do list. Not to mention the fact that it’s been an icy mess outside so the kids have pretty much been cooped up inside for most of the week. We did get out for a play date earlier in the week and we’re about to head out to spend some time at Pet Smart and then art class this afternoon. 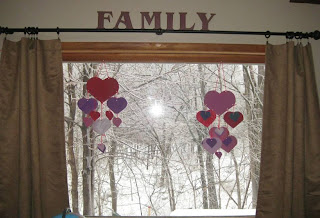 We did get in some painting this week and starting thinking toward Valentine’s already. These mobiles(recycled cereal boxes, paint, yarn) turned out even better than I had imagined and look pretty cute with the icy trees backdrop! You may also notice the new curtain in the picture that Mark hung last weekend. That old window is starting to get a bit drafty and as much as I didn’t want to cover it, it really does warm things up and make it feel cozier in there. 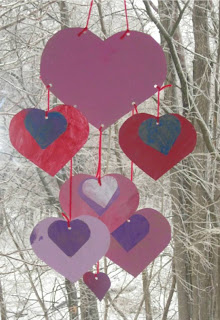 Toby had specific instructions on exactly how his hearts were to be hung. He wanted the smaller ones to be on top of the bigger ones because “that would look super cool!” 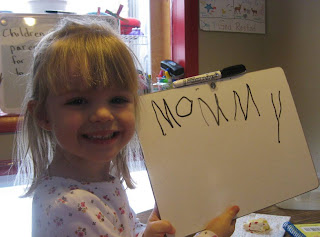 Lilly has eased into her own little bit of daily copy work now. When Toby is doing his, she asks me to write a word on a dry erase board and she’ll sit and copy it onto her own board. She is really getting great at forming her letters, both upper and lowercase. She practices the sounds they make and is starting to put some of them together to “read” already. Mark was surprised the other day when she was trying to sound out a word on a magazine, apparently I forgot to tell him she was doing this now! I really have not been pushing her to do any of this, she is just so insistent on doing what Toby does that she wants in on the action. So, if she loves to learn, I certainly won’t stop her!
~~~~~~
Toby is slowly moving through Math U See Alpha and now that he has pretty well mastered his addition facts of +1 and +2 I think we’ll take a little break and work on time and money again for a week or two. Mainly just because we can since he’s working well ahead of where I had anticipated him being at this point. We’re taking things slowly to be certain that he is memorizing those facts before we move on too.
~~~~~
His reading has become even more fluent and he is enjoying it again which brings me great joy! Since backing off on the worksheets we have jumped into the Ordinary Parents Guide to Teaching Reading at where he is comfortable and we are just simply reading out of that, the Horizons readers, playing sight word and phonics games, and he spends quiet time reading by himself each day. I am going to be getting him into Explode the Code though as soon as I get it as he moves into more difficult digraphs and diphthongs.
~~~~~~~
All in all, it’s been a pretty low-key week. The last couple of days have been spent in and out of the blanket fort that has taken over the living room, listening to music, reading Rudyard Kipling’s Just So Stories, Trumpet of the Swan, and poems from A Child’s Garden of Verses and taking in some really cool scenery from outside our windows.
It doesn’t get much better than that!
Previous Post: Perfectly Ordinary Days
Next Post: Putting Out Fires