It’s been another busy, but fun, week here and this is one tired mama! As always though, I wouldn’t change a thing, it’s all worth it. Here’s a quick recap of a few of this week’s events: 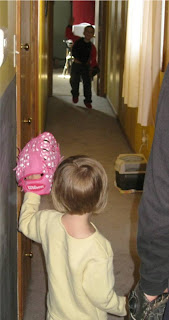 Counting down to baseball season and gearing up for spring has brought out the gloves and squishy balls for some hallway baseball! There is certainly never a lack of physical exercise in this home! Thank God for an active daddy! 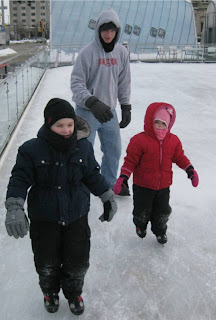 Monday we took advantage of some free admission passes to learn to ice skate! It was a first time for all of us and we were all excited and surprised at how well we picked it up. Of course some of us are still feeling the effects of that today….. 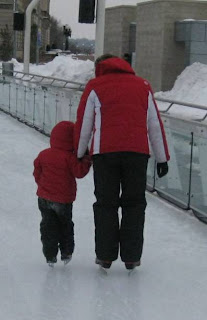 Lucky for the little ones they don’t have as far to fall! 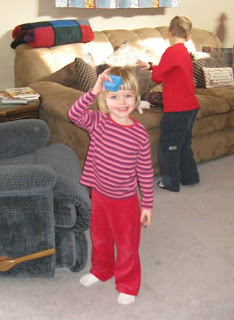 We pulled out some different games and got creative with some old favorites too. We have a much loved old set of Tuff Stuff ABC Blocks and had a great time playing hide-and-seek with them. The rules were that they could only pick up one letter at a time, then they had to hold it high and yell out the letter name before running to put it in the bucket. We each took turns hiding the letters and mixed things up with yelling out letter sounds, and colors too. Very fun! 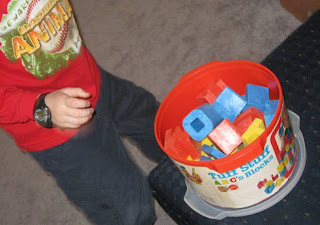 You may notice Toby’s watch in this picture….he picked it out 2 summers ago when we were at a garage sale and he had “wanted one all his life” of course he would have been 3 at the time! Now that he is learning to tell time he has become completely obsessed with this watch! It has become a really great learning tool for him as he is totally grasping the concept of time more than I had thought he would at this point. However, after hearing, “Mom, it’s 10:32.” “It’s 10:34.” “Now it’s 10:37.” “Pretty soon it will be 11:00 and almost lunchtime!” I sometimes have to ask him to stop telling me the time EVERY 2 MINUTES! In all honesty though, I think it’s great and I’m honored to witness his enthusiasm with learning this new skill! It makes me thankful once again to be his teacher. 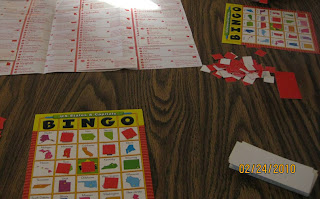 We are getting excited about planning our trip out west to the mountains this summer and the kids are always interested in what states we’ll see and be driving through. To mix things up a little from just studying our maps and globe, we started playing States and Capitals Bingo this week. I was surprised to see that even Lilly can find a couple of states already. 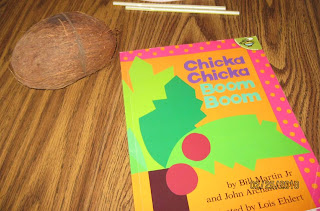 I like to try to be intentional about making connections with books or lessons that we learn in hopes that they will stick a little more. I also think it’s important to try new things once in a while. When I shop I like to pick up random new things to try once in a while, just to get a break from the norm and let the kids know that there is so much out there beyond what we normally eat. Sometimes I find that one of us really likes something I never would have realized otherwise. So, this week I picked up a coconut and knew that it would be great to go along with one of our old favorite books, Chicka Chicka Boom Boom.
~~~
As I suspected, the kids knew all about the book, the letters, etc. and had an idea of what a coconut was, but didn’t REALLY know what a coconut is. Exactly why we did this: 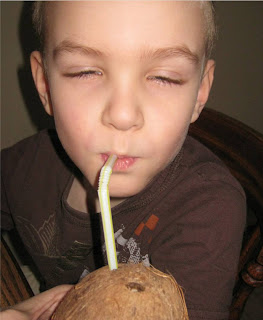 We tried the juice. This look is deceiving….they both ran for a drink of water after trying it! 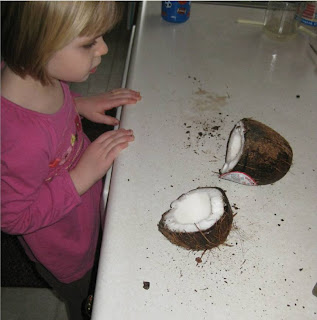 After guessing what we might find inside(nope nothing orange!), I literally used a hammer to crack this thing open and we tasted it. So, we’re not big fans of coconut. I knew I wasn’t and I knew what it would be like inside, but they had no idea. Now they do, and they learned something new.
~~~~~~~
Something else new I have started this week is to shorten Toby’s copywork to only the scripture verse we are memorizing that week. I present it to him on Tuesday and he has until Friday to finish it. He can do the whole thing in one day or a little bit each day, it doesn’t matter, as long as he takes his time and it is his very best writing. I also leave this out on the table for him to do it before we even all sit down together since they usually beat me to the table anyway. This has been a nice little incentive for him to get a jump start on his work and to show his independence a little bit too. These changes seem to have changed things up just enough to take off a lot of writing pressure that had been building lately. Mid-year writing hum-drum solved! For now anyway…

Toby has been stepping things up in the area of responsibility so much so that we have added a new chore to his chore sticks. He has been doing an amazing job of taking initiative to do his morning chores without a word from anyone. The best part is that he is proud of the responsibility that has come with knowing that he is expected to do more and that he is capable of those expectations too. It is a bittersweet time for me, as a mom, to see that he is so capable and able to do so much without any instruction or reliance on me.

We had our first experience with trying school on the road today when we took Explode the Code with us to the dentist this morning. Toby was able to knock that out on his own (in between learning about dental tools and x-rays) while Lilly and I got our teeth cleaned!
~~~~
We’re also working on “Growing Good Fruits for God” each week during Lent but since this post is already bordering on ridiculously long I will save that for another post!
To see how this week went for other homeschooling families, check out Weird, Unsocialized Homeschoolers.
Previous Post: The Mom Song by Go Fish
Next Post: One Thousand Gifts