It would be one crazy-long post to try to catch up on all that we have been up to since I began my blog break. I am feeling the need to document the memories we have been making though before they pass us by and are long forgotten. So, I’ll have to make a few posts of random catching up lists of things we’ve done in the past months.
Please remember, if you want to continue to follow this blog, you will need to read this post and get in touch with me to get your name on the list so I can get the password to you when I make the blog private.
Easter was an especially beautiful time this year. The kids were invited to an Easter egg hunt at the home of a friend of mine, we also colored eggs, watched the Pony Express, spent time with family, friends, and lots of time at church during Holy Week. 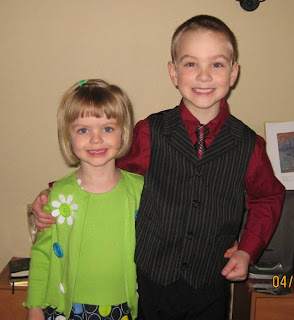 Toby received a game for Easter called Rush Hour that he just loves. He had played it before at his Godparents’ house and is thrilled to have his very own. It is a wonderful game to practice critical thinking skills and I love the fact that it is a game he can play by himself for a very long time! I include it here because I highly recommend it! 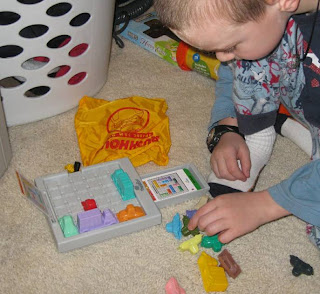 We also ventured back into the world of work boxes for our school time! Although this time we are doing things OUR way. When we attempted these the first go-round I had just read the book and felt like I needed to work the system exactly as it was designed. Being new to homeschooling I was not completely comfortable yet with what I was doing and using for curriculum quite yet either so we gave it a try. It was a TON of busy work and that was just not our style. Now, we love the way it works for us. We are using this drawer system instead: 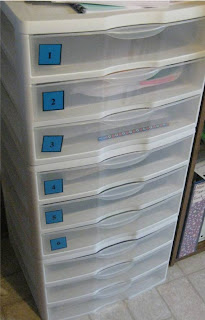 Instead of filling the drawers with a bunch of excessive review and fun stuff that we do throughout the day anyway, I only put our actual “book work” in the drawers. Mainly, the things the kids can do independently. I really love the way it has given Toby so much more independence that he often does his lessons before 9:00a.m. and Lilly is so busy that she rarely bothers him while he is working away. It’s a win all around. 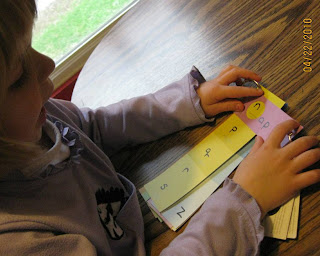 Lilly has blown me away once again by showing me that she is starting to READ! I have been trying to figure out just what I want to plan for her next year of pre-school and she has proved exactly why I was unsure of doing another letter/number/color year. She is obviously ready to move on. She picked up Toby’s letter family paint chip game last week and began sounding out 3 letter words perfectly, today she even did some 4 letter words with beginning blends like ‘cl’ ‘fl’ etc. 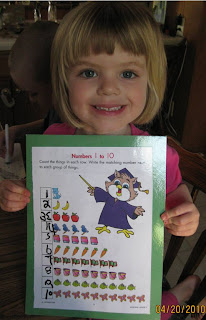 However, she didn’t stop there. On a whim, I tossed this laminated counting sheet in one of her drawers to see where she was at with counting/writing numbers. Apparently I have not been paying enough attention to what exactly she knew because I had no idea she was capable of writing her numbers this well already, let alone IN THE BOXES! I did have to help her with the 2 and to turn the 3 around to face the right way, but she did all of the rest of the numbers completely on her own. Since then she has continued to write her numbers, including 2 and 3 just right. Frankly, I’m still unsure of what to do for/with her next school year. She’s only going to be 4 in September but it looks like we’ll be moving on with reading and writing, that’s for sure! 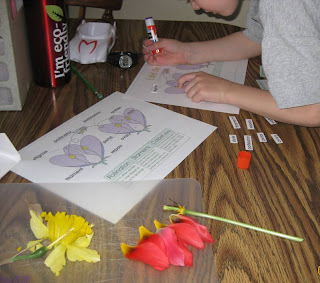 Toby has also been showing his stuff as we wrap up his Kindergarten year. He is in the middle of a 1st grade math curriculum and although I know he could go through it a lot faster than we are, I’m taking it slow just to make sure he is having lots of fun. He has completely taken off with his reading and recently took an interest in reading chapter books. He asked if he could read one and the one he picked out was a 2nd grade reading level but he is reading the entire thing!
Going into spring we have been spending a lot of time outdoors getting our garden ready and so many other projects. We have taken many hikes and the kids are getting really great at identifying plants, weeds, wildflowers and even a couple of plant parts after we made a lapbook of plants and flowers, dissecting a couple of flowers to help too.

Overall, things are going really well for us as a family. We have recently paid off our last small debt and have become 100% debt free!! We are looking forward to having extra money to put into the many projects that we have been dreaming about for a long time as well as saving up for a newer van eventually.
~~~~~~~~~~
Just to make sure you realize that we do have thorns among the many, many roses:
Lilly recently got creative with a pen…ON THE COUCH…as well as a crayon-on the windowsill…and a bathtub crayon-on the bathroom wall-not the bathTUB wall, and NOT while she was in the bath, nor while she as supposed to have them!
Toby ETCHED his name into an old wooden bookcase in his room!
Lilly had a tick on her head that we didn’t find until the day after we went for a nature hike!
I found 10 of the 35 pounds that I lost a while back! GRRRR.
Toby is STILL sucking his thumb!
Lilly is STILL sucking on her blanket to go to sleep.
Can’t win ’em all huh?