When we are not dressing up like clowns in mulberry juice…. 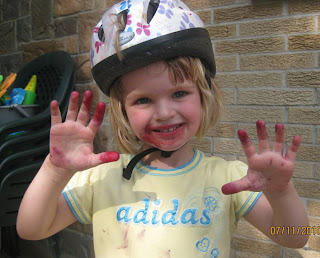 this summer has found us busy cleaning up the homestead, which has led to finding several new critters, like this huge garter snake Mark came across while cleaning around the barn. He has been amazed at the number of garter and brown snakes hiding back there. We rarely see them out and about but apparently they have had plenty of junk to hide in for a long time. I wonder where they’ll be hiding when all the junk is gone….

These next little insects are not the friendly kind that you want to find on the underside of your squash plants. These are squash bug eggs and the newly hatched little buggers that were found on the underside of our zucchini leaves. If left alone to do their thing they will do some serious damage to the squash and make for a very crabby gardener. So we squashed them! 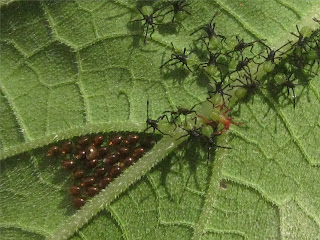 Yesterday Toby mentioned a couple of times that he wanted to show me a ‘really cool butterfly’ that he found and thought was injured or dead. He knew I had been suffering from a migraine for a week and bless his little heart, apparently didn’t want to push the issue. Finally, last night, he showed Mark this little fellow. They came in and mentioned to me(as I was lying on the couch wishing the pain away!) that they thought it was a Luna moth! Having wanted to see one of these alive for as long as I can remember, I drug myself off of the couch to go outside and look for myself! 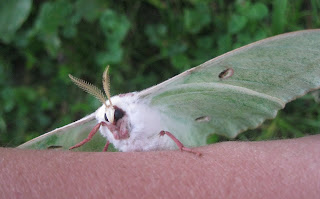 Sure enough! A beautifully magnificent, three-legged, Luna moth! Huge and struggling to get around. It was shaking and having trouble controlling it’s movements. It took right to me when I put out my hand and proceeded to lay a nice little line of eggs on my arm. At the time I thought it had deposited some frass but after reading up on it we learned it was eggs. The adult moth only lives for a week and it’s sole purpose is to mate and lay eggs. It does not even have mouth parts to eat with! It literally procreates and dies! What an amazing blessing to witness this! We couldn’t resist keeping it since it seems to be on it’s way out anyway. 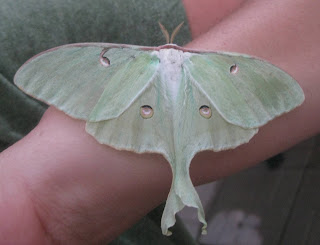 We have also been raising anise swallowtail caterpillars that were passed on from my sister-in-law’s dill plants. I’ll post about them separately as they progress. Mark is on the hunt for the infamous groundhog/woodchuck again and in the process has captured a baby raccoon. I can’t begin to post all of the bug and critter pictures that I just took off of my camera but what a great summer of science we are having here!
Previous Post: Summer Update
Next Post: Imagine