Last night as I sat in a church meeting chatting with some friends, I came to a realization….what is completely normal for us, is apparently just not so for most people. My friends and I were chatting about the new things we have experienced since last year at this time when we met to start the new year of faith formation. They get such a kick out of the daily adventures that we have, which to us, are just another day in our life. We like to try new things and keep things interesting, always involving the kids along the way. Life is learning, right? Don’t get me wrong, spending 4 hours on our mower most Friday nights through the summer is not exactly exciting, but it’s not quite most people’s idea of ‘normal’ either. But to us, it is, which leads me to another one of our recent adventures…..meet Chippy: 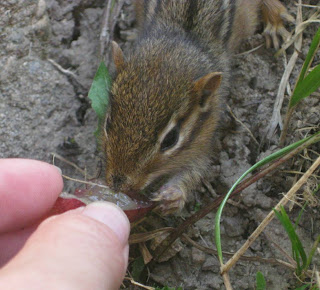 Yesterday the kids and I were sitting out on the patio, enjoying the beautiful afternoon and playing a game of Trouble. Something “jumpy” caught my eye on the hill and this little guy proceeded to JUMP, not scrurry, all the way up the hill right under the table we were sitting at! He is TINY. After some research I’m guessing newly weaned and maybe 7-9 weeks old. I have seen a lot of chipmunks since living here but never one this small that he can only jump! 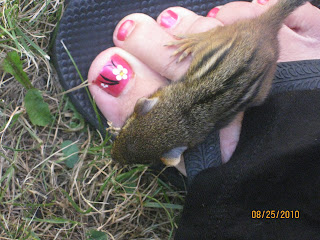 We watched him for a while and tried to give him space but he came closer and closer to us. Even crawling over our feet! Finally, curiousity got the best of the kids. For nearly 2 years Toby has been talking about wanting to train a chipmunk and out of nowhere this little baby one shows up! What are the odds!? To makes things even more weird, we just started reading The Burgess Animal Book For Children and are into the chapters about squirrels! As if God didn’t have a hand in this! 🙂 Anyway, this little guy kept hiding under my long skirt when I sat on the ground and was so scared. We started hand feeding him grapes and he was eating them like crazy. He would eat them out of our hands but wasn’t really eating much from the ground at all. When we’d leave him alone and just sit there he would find a place to hide like this: 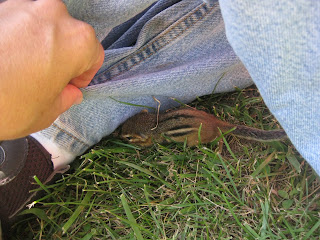 under Toby’s pantleg! We kept trying and trying to give him space to go home but he never went back to a burrow. The kids went on playing and had to watch where they walked because he was so little and kept jumping around everywhere in the yard. I finally took him down to the bottom of the hill in hopes that he’d find his way back to his home. He ended up coming up and hiding under the kids’ playset!
By the time I had to leave for a meeting and Mark and the kids needed to leave to run an errand we decided we had to do something to help this poor little guy. He was just huddled up under the playset shivering since it was getting chilly. I ended up getting him a box all set up in the garage and set him up for the night. I’ve been reading up on what to do to raise him until he is ready to be set free and we keep trying to get him to go back to the wild but he just doesn’t seem ready yet. He still prefers to be hand fed and he just doesn’t act big enough to survive on his own yet. So we’ll keep trying to make him stronger for now and hope to set him free when he’s ready. We just worry about the stray cats and other wild animals out there waiting for an easy target like him.
For now though, Chippy is a new little addition to our family I guess!
Previous Post: Moving right along
Next Post: School Begins Again