Last night the kids and I had just came in from playing outside after church and dinner. Mark was working late. I got Toby settled into a bath, Lilly was playing dress-up in her room and I was standing at the kitchen counter sorting through mail and misc. papers when I just got this feeling that I was being watched. A sorta creepy feeling since Mark was not home. Finally, something caught my eye in the direction of the big picture window and this is what I met eyes with: 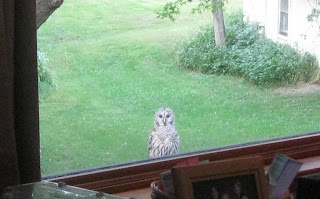 This huge barred owl was literally staring at me! He would swivel his head around once in a while but then lock eyes with me again as I stood frozen in place just staring at him. 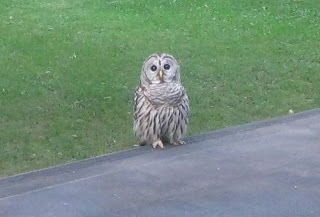 Those huge, brown eyes were so human-like and check out those feet! I finally regained my composure and beckoned for Lilly to grab my camera and quickly/quietly come into the kitchen. I didn’t specify for her to NOT go by the window and she ran right past it. The owl didn’t flinch. I was able to get several pictures of it. In the meantime, Toby came to join us, dripping wet and naked! We all stood there just stunned that this amazing creature was standing there staring back at us less than 5 feet away from the window! 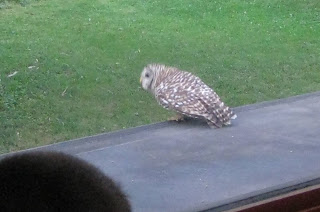 He eventually tired of the game and flew up into a nearby tree. Minutes later, as Lilly was on the phone telling Mark all about it we saw it swoop down right in front of us to the front of the building out back. It looked like it almost crashed into the bottom of the wall. I was concerned at first that maybe it was injured but when I went to another window to take a picture it flew back up again just fine. We’re guessing maybe it had just found a tasty little treat!
Previous Post: Tea for a princess
Next Post: Counting Blessings