I only half-heartily considered making my own homemade vanilla extract in the past until local dad Trent of The Simple Dollar gave a play-by-play last year. That lit my fire and I’ve had it on my list since. The time finally came and I found vanilla beans from the co-op I order from. I was amazed at how simple it was to make but the true taste test will not come for 6 months.

It all started with a 1.75 liter of Vodka and 7 vanilla beans. 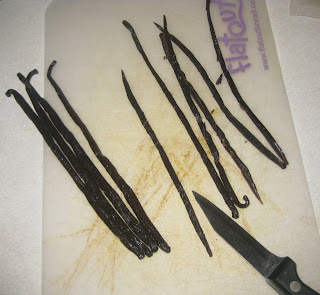 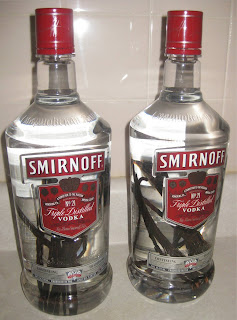 Slipped the beans into the bottles(I’m making 2 batches to have extra for gifts). Capped the bottles and gave them a good shake. I’ll store them in a dark closet.I will continue to shake weekly for 6 months. At that point I will remove the beans and strain the extract through a coffee filter and into smaller bottles.

I had NO idea what a good deal was for the vodka since it was honestly the first time I had ever purchased it. I paid $22 on sale(reg. price was $29). I’m not sure that was the best price I could have found but I wanted to get it started. The vanilla beans cost $5.15 for 1 oz. or 7 beans. I don’t have the smaller bottles yet so I can’t really figure how much it will break down to per unit yet. For the amount it will make it will last a very long time though and should supply a decent amount of gifts so I figure it will end up being worth it.

EDIT:  This post was originally written in April 2011.  The vanilla brewed to perfection by Christmas and is now a staple in our home.  I gifted several bottles to family and friends for Christmas and it was very well received.  Pictures of the super cute bottles are here.  I ended up not straining it at all, the tiny beans add flavor.  After using and giving a good amount of it I simply added more vodka to the same beans and it will continue to brew.  I kept an old bottle from store-bought vanilla and just refill it whenever I need more.  It is amazing and I’ll never need to buy store-bought again!

This post is linked up to Frugal Tuesday Tip, Frugal Days, Sustainable Ways, Encourage One Another, Raising Homemakers, Simply Lives Thursday and Works for Me Wednesday.