Growing up I always dreamed of living on a farm. There was a farm house on the way to the lake we camp at that I used to call “my house” even. I imagined days full of kids, a big garden, orchard, flowers, chickens, cows, and a big country kitchen with a slamming screen door, porch swing…..Fast forward to now and I’m practically living my dream! Well, except for the cows and big kitchen! But we’re getting there!
The past couple of weeks have seem some major additions and changes to our little homestead.
~~~
Mark has started clearing out some really old, HUGE, dead trees in the woods. 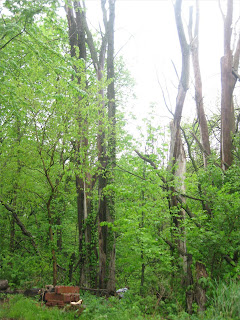 See the little grey spot at the bottom/center? Yeah, that’s Mark. Did I mention HUGE trees? 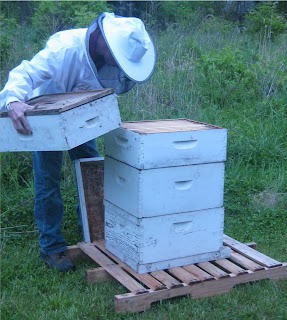 We became backyard beekeepers late last week. Mark is already planning where he’ll put his next hive. I’m just hoping not to get stung and really looking forward to harvesting our own honey and maybe some beeswax. 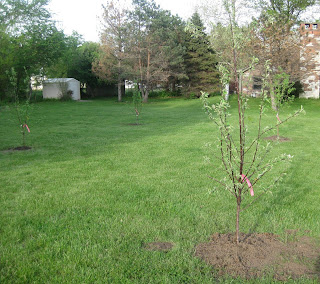 We added a Honeycrisp Apple, Jonathan Apple, Bartlett Pear and Parker Pear to start our orchard. Not too far from the bees, which were happily buzzing around their hive today, hopefully making a queen to sustain them. 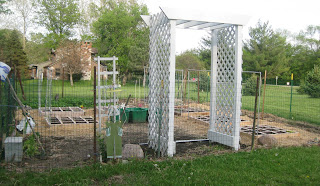 On Mother’s Day weekend, Mark built this little beauty! He is already planning a gate and maybe even upgrading the fence someday. I planted grapes on the sides to see how they do. 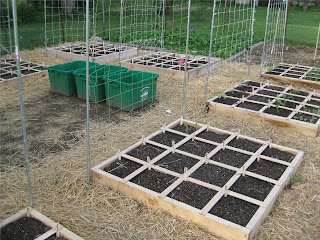 I am changing things up drastically in the garden. Mark built me 5 boxes and 1 for each of the kids. It’s a little adjustment to completely have faith in the “less is more because this awesome soil is going to produce amazing plants” but I’m holding out hope. Considering how bad our soil is in there and the problems we’ve had because of it, it can really only get better. In the back left corner is my strawberry patch with lots of little berries growing! Then to the right of that I put nasturtium and zucchini in the ground because they did really great last year. The compost is still in the far right corner(not pictures) but we did away with the box we used to have and just fenced in the corner. We’ll be adding slats to the fence to disguise it a bit. 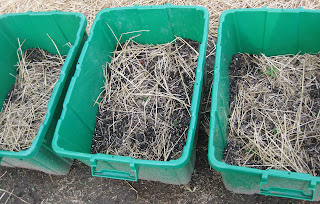 I threw some of that awesome soil into some extra old recycling boxes and planted potatoes in them. There is a lot of green popping up in them!

This is an extra side of the garden with the berry bushes. Starting at the top there are 6 sets of raspberry canes, then 2 ground cherries(new this year) and 2 Jersey blueberry bushes(also new). We need to remove the fence from the inner side but I didn’t want the deer to have a chance at the bushes before we do. We’ll be tilling up a separate area between the garden and orchard to put the pumpkin patch. 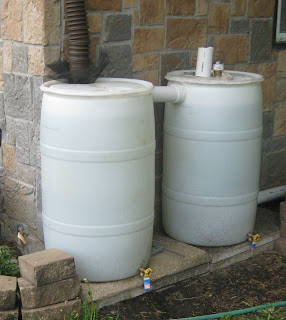 Finally, after having these barrels sitting out back for 3 years, just waiting for their day….we have rain barrels!! Mark did a super job on them and I already watered the garden with them today.
~~~~
One step at a time, adding a little each year, we are starting to see our hopes become a reality. We are still making plans to get into raising chickens but things are looking great for next year. Until then, we have my sister-in-law’s chickens around enough to hold us over. The big kitchen is going to be a little way off but someday I think it will be a reality. As for cows, we’ll just have to keep dreaming on that one a bit more…
Previous Post: What’s going on…
Next Post: 1st Piano Recital