As we all know, growing our own fruits and vegetables requires a great deal of patience. This year I am so excited to see the pay-off from all those years of patience.  We started making changes and adding to our property years ago, envisioning the homestead we someday hope to have.  Each new year brings us closer and closer to that vision.

I forget how many years ago, we were given several small, twig–like trees and were told that they were all crabapple trees.  I tucked them away in my garden and nurtured them for years, until they were ready to move to the front yard where I wanted them.  We could tell before moving them that only a few were, in fact, crabapples.  Those were planted out near the end of the drive and the rest, which we later learned were chokecherries, now line our driveway and south end of the house.  They now stand over 6 feet tall and have doubled, maybe even tripled the amount of cherries they are producing this year from last.  We have become quite fond of the jelly and syrup we have made form them. 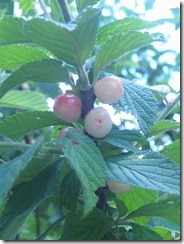 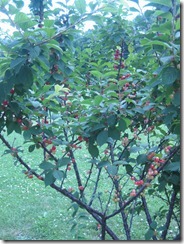 Last fall, I waited until a local greenhouse had their raspberry bushes on sale to move for the season and picked up a variety of purple, red and yellow canes.  A nice mix of different harvesting times too.  These are the early ones coming on now: 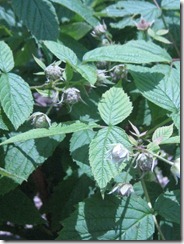 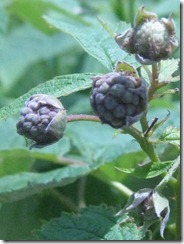 Last year I also retrieved some rhubarb plants from my Nonna’s house and planted 4 areas of that along the outside of the garden.  It really didn’t seem to be growing well there and I decided to move it in order to make room for the pumpkin patch anyway.  Now it sits between the raspberries and blueberries and is doing really well.  I need to figure out what is eating it though. This spring I added 2 blueberry bushes and they are looking great.  We had to treat the soil to get it to the proper ph level and it seems to have worked because they are starting to produce now. 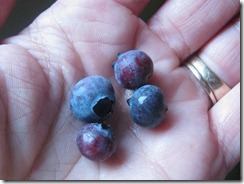 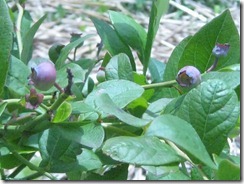 We’ve also had a strawberry patch for a few years that keeps stretching it’s limits every year.  I completely moved it to the other side of the garden a couple of years ago and it seems to be doing great now.  I have been able to freeze 3 gallons already and it is still producing, though slowing slightly.  These are out there waiting to be picked right now.  Better get to work! 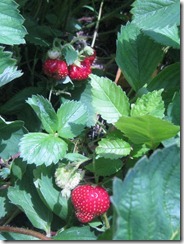